Wow! One month old already. Every Wednesday I remember and re-live the events that followed on the 23 November 2016. What I went through on that day seems to have only happened yesterday yet Christmas is nearly here and my little jolly gentleman is growing so fast.

Even though I don’t seem to be able to get much done on a daily basis, looking back over the last month I do seem to have kept myself fairly busy.  I shall try to recollect all the things we have been up to in the last month.  With regards to reaching milestones, Tobias is able to lift his head and keep it steady for short periods of time, he jumps at loud noises and recognises certain people’s voices.  Tobias stares at peoples faces as long as they are in close range and is able to play games like copying people – for example sticking his tongue out and opening his mouth wide.  He really likes black and white objects or patterns and stares at the beams in our home all the time.  He definitely smiles and also laughs in his sleep (we are still waiting for giggles when he is awake) so he must be having good dreams!

Week One: We stayed in hospital for two nights and on the Friday, Tobias and I were discharged. We went to live with my mother to be able to get the initial help and support that was needed. We visited family members over the weekend and on Monday 28 November 2016 we met with the  community midwife.  She weighed Tobias and it was found that he weighed 8 lb 10 oz, meaning that he had lost 3% of his body weight following his birth. 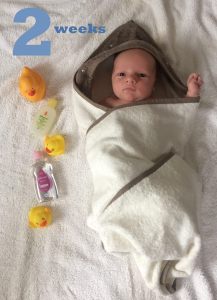 Week Two: On 01 December 2016 Gavin and I went to register the birth and confirm his full name, we also registered him with the local GP. We kept busy and went for two walks with Tobias in his pram around the local parks. Tobias was starting to get into a routine and was sleeping for eight hours a night, however this was in two and a half hour intervals. His umbilical cord fell off this week and he also started to suffer from baby acne. The midwife visited over the weekend and it was found that he had put on weight again and now weighed 8 lb 13 oz.  They also did the heel prick test, which we have since found out he is negative for sickle cell and other diseases they tested for. We finished the week off by giving Tobias his first bath and surprisingly he really enjoyed it and gave us plenty of smiles.

Week Three: We moved back home to the farm this week as we had been signed off by the midwife and were now due to meet with a health visitor on a regular basis. Tobias also developed reflux which you could tell was hurting his tiny belly as he was raising his legs in pain and crying out a lot.  I took him to the GP who prescribed Gaviscon for Infants which did seem to help but made him constipated and hardened his stools. The health visitor also weighed Tobias when she visited and he weighed 9 lb 9 oz. This week we also started getting into the Christmas spirit and went to buy the tree, which is now fully decorated and has lots of presents under it. Finally, the three of us went out for our first experience of food shopping together which lasted two hours (double the normal time it would take us).

Week Four: This week Tobias’ baby acne and reflux disappeared but he now has developed colic, which is really upsetting to hear him screaming.  It lasts from 6pm every evening until approximately 11pm, however it does vary. We had a quieter week due to this and only went out of the house a few times.  One time to go for a walk around the local reservoir, where he decided to scream the whole way around, much to my delight. Finally he finished the week off weighing an impressive 9 lb 14 oz.

Finally, from Gavin, myself and our little jolly gentleman, Tobias we would like to wish you all a Very Merry Christmas!