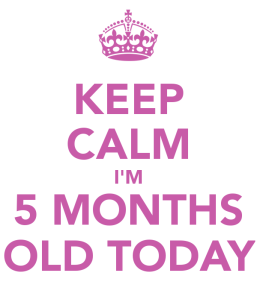 Well that month flew by. Month five has been a trying month, Tobias seems irritable in himself and easily gets frustrated with everything and anything. I think this is due to him not being able to move yet but wanting to try never the less. I also wanted to note that this has all had an affect on me, I know I’m not depressed I’m just exhausted but this is the reality of being a parent. Saying this, it’s always nice to know that your not the only person in the world having problems and it is ok to cry every once in a while.

We have continued to give him a bottle of formula milk as his last feed every night (5oz) as well as start the early stages of weaning, the first 5 days we gave him baby rice at our tea time and we’ve continued to build it up so he now has baby porridge in a morning and the baby rice at lunch time and tea time. This however, has not changed the amount of milk he has and still continues to breast feed around every 3 hours. This is also the same at night time, waking every 3 hours for a feed. We plan to start vegetables and fruit this month so I shall let you know how we get on. 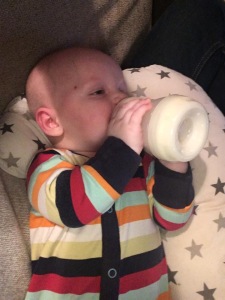 This month Tobias is mastering skills such as sitting for short periods without support andthen either falling left, right or even face forwards. He has started to get upset when other people, other than myself and Gavin, hold him. I have read this is normal at this age and is called stranger anxiety. To add to this whenever I leave a room he gets very upset and squeals if I don’t come back. He had a full week of bad nights due to teething, his cheeks went red and he wanted something in his mouth constantly, he woke himself up crying a few times. He blows lots of bubbles and ends up spitting on everyone. He shows great interest in people who act differently and will stare at the funny faces people pull at him. Finally, he has started trying to move when on his tummy in what can only be described as an army crawl but backwards. He also doesn’t ever want to lie down or sit anymore he is forever pulling himself to an upward position to stand. 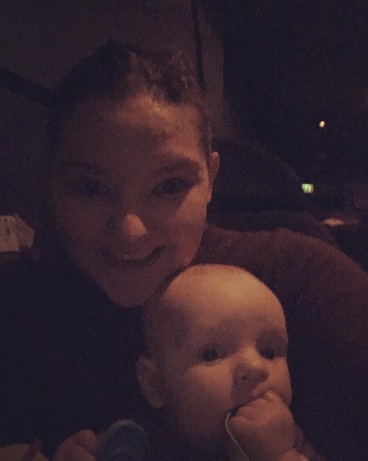 Week seventeen – this week we went with a group of friends to the local cinema which was specially for babies. We watched the new beauty and the beast film and couldn’t believe that it went on for 3 hours. It was great, the lights were left up and the music wasn’t as loud for when babies wanted to sleep. Tobias was mesmerised by the big screen.

Week eighteen – I went to my first mummy fit session and I was broken by the end of it. It took me 4 days to recover which proves I do need to start some kind of fitness to start getting back in shape. This was also the first time I left Tobias with his dad. I went out for 3 hours to a clothes show and was nervous the whole time I was there, secretly I think Gavin was relieved when I got home!

Week nineteen – this week it was Mother’s Day, which I’ve already spoken about in a different post. I also went with Tobias to the little gym which was a session designed for little tots, helping them start to strengthen their bodies ready for crawling and walking. I loved the time there and am looking to go to regular classes once Tobias is a little older and bigger.

Week twenty – we went car shopping, it has become very noticeable that I need a new car, a bigger car to fit all the baby stuff in. We have finally found one in Doncaster and I couldn’t be happier with my purchase it’s certainly taken a weight of my shoulders after panicking how we were going to manage. We also met with the vicar to discuss the date for the christening and we have now got everything booked and ready to go! Finally we went to a farm shop to buy all the vegetables and fruit for Tobias to start weaning. We start Monday 24th April and I am very nervous. I’m all ready to go though and have done some batch cooking/pureeing that is now frozen into ice cubes.