The Farm & My Life as a Farmers Wife

We predominantly are a dairy farm. There’s approx. 175 milking cows, with 30 dry cows (awaiting to give birth) following. We sell all our calves on once they have been weaned off milk which means we usually have up to 30 young stock on farm. As well as the dairy we have thirteen pet lambs that help keep the grass down in fields where we can’t get farming vehicles.

Then on top of that we have three dogs, one Labrador and two cocker spaniels. The black cocker is now retired but the other two are working dogs that help out with Gavin’s shoot. Finally we have one cat, Tess who has been with me since pre living at the farm, she’s an old girl and certainly has a temper but loves the farming life and loves nothing more than been out and about (She’s a very good mouser). Our extended animals include pheasants and ducks which are part of Gavin’s shoot and then we always have deer on farm, usually around the woods, that have come from the local deer park!

A lot of people ask me what it’s like to be a farmer’s wife. Ask anyone in this industry and they’ll say it’s a way of life not just a job. It’s definitely a very different life to what I was used to have before Gavin!

Gavin gets up for work around 5am (after I’ve listened to his alarm going off for half an hour and eventually kick him out of the bed)! Tobias and I wake up around 7.30am, Tobias has a bottle of milk followed by us getting up. I get dressed and then I change Tobias and get him ready for the day too. We then go downstairs and play until Gavin comes in from morning jobs at 9am. We then have breakfast together, swiftly followed by Gavin going back out to do the jobs that are needed to be done for that day.

Depending on which day it is we may then need to go out or if it’s a day at home, Tobias would go and play whilst I run around tidying and cleaning. Lunch is around 1pm when Gavin comes back in from work. Tobias has a nap in the afternoons for two hours usually, so he would normally be ready to go down by now and I try to catch up on my TV and writing blogs. 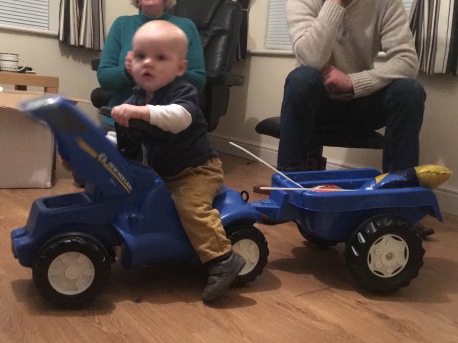 I try to get out with Tobias every day, so once he wakes up we either have a walk around the farm or we will venture out to a park somewhere. Evening meals are made to eat by 7pm. When it comes to dinner, it always has to contain some sort of meat. I understand that it is a physical job and Gavin needs as much reserves as possible! Its usually into the bedtime swing once we’ve finished eating! Bathing, changing, book and a bottle for Tobias.

This is just a snap shot of one day and that is the thing that people who aren’t from farming backgrounds don’t understand. Every day is different! In the summer my farmer husband can work for eighteen hours straight, bringing in the silage.

We haven’t been on holiday since our honeymoon and I’m forcing Gavin to take us away this year, even if it is just in England. Unless we need something or have an appointment somewhere, we don’t actually need to go out as there is so many exciting things to do on a farm! From petting animals to sitting on tractors, it’s all an adventure to Tobias.