Two Under Two – The Adjustment

Let me start by saying – Motherhood made me a better person and every day I’m learning from my children.  My growth gives me inner strength to be able to continue and complete each day and do it all again the next! I have had so many people ask how I did it with two so young and my answer every time is it’s easier with two! So let me explain….

What’s it really like having two under two?
Listening to other people I had build up a nightmare of having two children so young, close together. But being completely honest it’s not all that bad as I thought it would be. Transitioning to two children does come as a bit of a shock to the system, but transitioning from no children to one child was WAY harder, at least it was for me! I won’t pretend there haven’t been moments, every day has its trying times but then I’ll get a giggle from Hamish or a kiss (not asked for) by Tobias and all karma is restored. Don’t get me wrong though – Newborns are hard work!

The good parts:
Well, obviously there’s two little ones, that are all my’n! Proud mumma moment!

The perks of having two babies very close together are that you haven’t forgotten about how hard anything is, you’re still very much in that stage, so all of my newborn tricks and hacks came back quickly.

The bad parts:
Everyone is right, you don’t split the love you had for one, your love just doubles. However your time does split between two, and deciding which way to juggle or who needs your attention the most is hard.

You go from dedicating your whole life to one little baby and then suddenly there are two of them.

The guilt can be crippling! Especially in the newborn stages! I still feel like i have constant guilt, it’s just manageable now. I miss Tobias and I miss quality time with him.

How did Tobias adapt?
I underestimated Tobias and here is the best part about having children close together! He was 20 months old when Hamish came along and it was like it had been the four of us all along. He didn’t know any different, he wasn’t petty or had jealousy and we didn’t have any problems with him hitting those milestones and developing, like you hear can happen.

I will say, when I first came back from the hospital with Hamish, Tobias felt completely alien to me. He was suddenly so big and didn’t feel the same. He’s always been independent but in some ways he’s even less dependant on me which is bittersweet. Its good as it’s less pressure on me, but hard because I miss feeling like his number one.

How have I adjusted?
Hamish was an easy baby, thankfully! So it felt like a duck to water until we hit the four month sleep regression and things just seemed to go downhill from there on. A lack of sleep does not help with two children in tow! However, that being said, I am thoroughly enjoying it way more than I thought I would. I am also a lot more relaxed this time round.

Tips & Advice:
Get out the house as soon as possible, it’s just easier!
De-clutter.
Make the most of your firstborn, cuddle them as much as possible whilst you can!
Get a sling or a carrier – it will be your new best friend!
Remember to look after number 1 (yourself)! It might not be easy but it’s a must!

It gets easier. I promise! 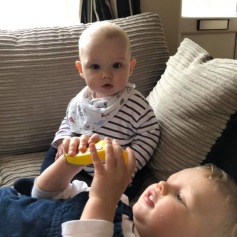