A year of Hamish, a year of being a mumma to two boys, a year of being a family of four!  This time last year I was on cloud nine, living in the newborn bubble bliss and trying to workout how to manage with two.  Don’t get me wrong it wasn’t all happy, but overall I only have good memories (thankfully)!

All Hamish ever wants to say is “Hiya”, he now adds in a wave, much to his delight.  He’s such a smiley boy when people interact with him.  He copies everything I do, banging the table, playing cheers with cups etc.  I’ve noticed that he can point with one finger at things now.  He has taken his first few steps (be it very wobbly).  I do feel like he understands what I’m saying to him, such as when I ask him to ‘stop’ or say ‘no’.

Week forty nine – this week it was Father’s Day.  We didn’t do anything special for it, but the boys spoilt their daddy with lots of cuddles, gifts and affection. 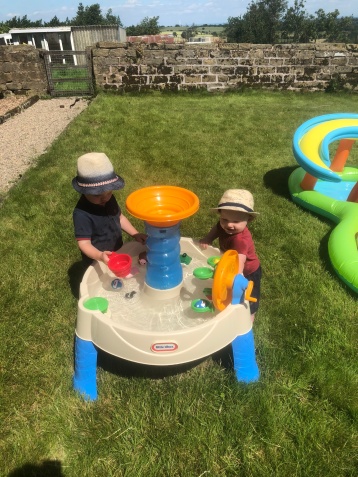 Week fifty – this week I took Hamish to messy play whilst Tobias was at nursery and he had a fab time.  Little beans cafe held a beach themed messy play activity, there were lots of different stations to interact with and I was very impressed.  Gavin’s parents had been away on holiday this week too, so Gavin had been busy on the farm with lots of help from Hamishs godfather, David.  Just to add to it, I worked on the Friday and Saturday so Gavin had to look after the boys also.

Week fifty one – this week was all about preparing for Hamishs birthday, I made a train cake with lots of help from my mother, we finished wrapping his presents and blowing up the balloons etc. 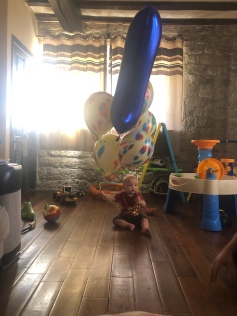 Week fifty two – for Hamishs actual birthday, Gavin took the day off work and we went to butterfly world in Preston.  We had a fab day exploring and shopping.  We had lunch and dinner out, so we were all truly spoilt.  In fact just by coincidence, Gavin decided he didn’t want to attempt Great Yorkshire Show with two children so he took the Friday off too and we went to Euerka for the day.

I cant wait to see what the next year will bring, watching Hamish grow is a real privilege and I’m very humbled to be able to call him mine.