Well, what a crazy couple of days we have just been through, I can only remember parts of the day, however.  Ive tried to piece together the timings of everything and also have sought the version of events from both, Gavin and my mother.  However it’s my third positive birth and I can’t wait to share the story with you!

Following my meeting back in September with the consultant, it was agreed that the same action plan for Hamish’s birth would be used again.  So from 38 weeks I would have a stretch and sweep on a weekly basis to try for a lighter baby, hoping to reduce my chances of tearing again (bearing in mind, I’d sustained a third degree tear with Tobias and a second degree tear with Hamish).

On Wednesday 15th January 2020, I went to the hospital to meet with the specialist who performed an uncomfortable stretch and sweep.  I was told it was a positive membrane sweep, the head of the baby was fully engaged and the doctor even said that I was 3cm dilated already!  I left the hospital that day thinking the procedure had gone well and I should expect something shortly!  The doctor had advised me to see my own midwife the following week if nothing happened, but she was 99% sure I wouldn’t need to.  Nothing happened!

I felt like everything had lowered but no contractions, so I visited the midwife on Monday 20th January 2020 for a second stretch and sweep.  The midwife was perplexed, I was now 5cm dilated and she said she was touching the baby’s head, she couldn’t believe I wasn’t in full blown labour and even had to call for a second opinion.  She completed the stretch and sweep and said she wouldn’t be surprised if I didn’t go into labour within the next two hours.  Again, nothing happened!  I went to bed that night thinking it was another failure! 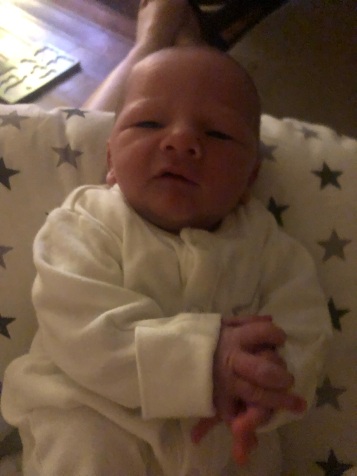 Hamish had a bad night, that night and joined us in bed at 3am, (Bloody typical, I wouldn’t get a good nights sleep before our new journey would begin).  Both children were awake by 6.30am on Tuesday, 21st January 2020, and still I felt nothing so started out our usual day.  At 8am mild contractions started, I was gob smacked, this was definitely not what I was expecting.  I gave Gavin a call and he came to take the boys to their Nanas.

I contacted my mother and from reading the messages, they say that the contractions were sporadic, different lengths of time in between contractions and lasting different times as well.  Of course it was vet visit morning on the farm, so Gavin called a friend to come and help out on the farm. At 8.30am I phoned Gavin to give him an update on the pain, shortly after I went for a shower which eased the back pain I was suffering from.  At 9am I phoned the labour ward to give them my initial details as I was having a contraction every 5 minutes, lasting 45 seconds but was able to handle the pain.  It was agreed I would stay at home a little longer.

However, by 9.30am the pain had intensified, so I got Gavin to call the labour ward, who advised me to come in.   The journey into the hospital seemed to take forever and I felt every bump in the road, It also didn’t help that Harrogate was grid locked and the stopping/ starting motion of the car was unbearable.  Of course there was a queue for the car park when we did get to the hospital so Gavin dropped me off at the front door (at approx. 10am) and I managed to walk to the ward by myself, whilst he parked the car up.

I had to go into the maternity assessment unit first to get assessed.  But as soon as I opened the door my waters broke and there was blood dripping onto the floor, I was quickly ushered through into the labour ward and into a room.  Whilst taking my clothes off there was a lot of blood which when I asked, I was advised wasn’t quite right and they needed to check on baby and my heartbeats immediately.  The room quickly filled up with multiple midwifes, doctors and lots of trolleys of different equipment (which I found out later was the haemorrhage kit). 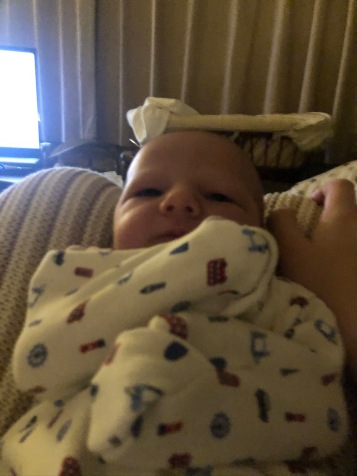 Whilst everyone was dashing around I felt a drop in baby and all of a sudden needed to push.  It was around this time that Gavin and my mother entered the room.  Straight away my body took over, the main midwife was trying to advise me to breathe but I just couldn’t stop my body and within three pushes (not voluntary pushes) the head was born.  I was given the gas and air but the mouth piece kept falling out of the handle and in the end didn’t help much.  Another contraction came and with one last push, the rest of the body came out and we found out we had another little boy (proves that no gender prediction theory is correct)! Baby was born at 10.31am.

Seth Rupert John Clarke was born after a two and a half hour labour (from first contraction) on Tuesday 21st January 2020, weighing 7 pounds 10 ounces. He came out, quiet as a mouse and stayed that way for the first twenty four hours too!  I was hysterical to say the least, I had instant relief from the pain but the shock of the events that had just taken place were overwhelming and I had the adrenaline shakes.  I still experienced the feeling of being an ultimate superwoman, its a sense of euphoria for me.  Seth was handed to me for skin to skin and to try to breast feed, which he wasn’t interested in. The midwives also delayed the clamping of the cord and I was given the injection to be able to deliver the placenta quickly.

It was then time to have a look if I needed stitches and I received the best news ever.  My third degree tear hadn’t been implicated nor had my 2nd degree tear!  I had sustained a small laceration that didn’t even need stitches!  Seth was given an injection for vitamin k and then handed to Gavin to look after, it was around this time that my mother left.  After I was assessed, It was found that I had lost over the recommended amount of blood loss so they put me on a drip of fluids for a few hours and kept coming back to check my stats.

Gavin left at 2pm to go do the evening jobs on the farm, whilst he was gone I had a shower and some food, followed by lots of soaking up all the newborn gorgeousness.  I was discharged that same night, we had to wait for the compulsory baby checks to be completed but once they were done we were allowed to leave!  We stopped off for a Chinese takeaway on the way home and walked into our house at 9.30pm.

Such a whirlwind experience and all in twelve hours, I feel like I’ve been left shell shocked!  I cant believe it’s all over and he’s here.  Keep looking back for Seth’s monthly updates, I cant wait to share his milestones with you all.